How to Earn More Links and Social Shares: Insights From 759 Content Marketing Campaigns

Is there a formula for wildly successful content marketing campaigns? It’s a question we ponder a lot at the Fractl office.

We do have our own tried-and-true formula that we continually tweak based on our observations of what does and doesn’t succeed. To help us spot trends that shape this formula, we collect data about every content marketing campaign we create for our clients. But we don’t keep this data to ourselves – sharing our internal data with the marketing community helps others create better content based on what’s worked for us.

We did this a few years ago using a set of 345 campaigns, and now that we have double the number of our campaigns under our belt, we dug into our data again. This time, the sample size was 759 campaigns that launched between 2013 and 2017.

As part of our analysis, we looked at the relationship between campaign performance, measured by the number of placements and social shares a campaign earned, and the campaign’s attributes, including emotionality, the target audience size, and timeliness. “Placement” or “pickup” refers to any time a campaign received media coverage. In link building lingo, a placement may refer to a link that is dofollow, cocitation or nofollow; we also count client mentions without links as placements.

Our campaigns that were either emotionally resonant or surprising were significantly more likely to yield a high volume of media placements and social shares than content that does not include these elements.

The chart below shows the prevalence of three factors across the different campaign performance groups. 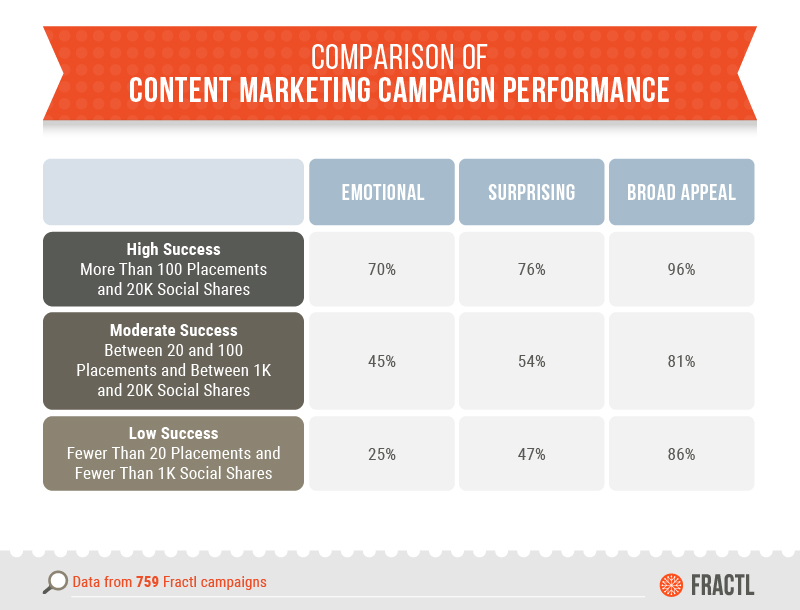 As you can see, emotions and an element of surprise were far more common in campaigns that performed extremely well.

There wasn’t as great of a difference when it came to whether or not campaigns were broadly appealing. We believe on its own this isn’t enough to hit a home run, but it’s telling that this trait was nearly ubiquitous among the top performers:

Let’s take a closer look at how each of these three factors correlated to campaign performance.

In our research on viral emotions, we found certain emotional reactions are best for getting content to spread:

An element of surprise

Surprise doesn’t necessarily mean shocking. Novelty, or newness, can also elicit feelings of surprise; incorporating information that isn’t widely known or new data are effective ways to play into this because it triggers a feeling of “I didn’t already know this,” which draws interest and encourages sharing the new information with others.

Furthermore, surprise or novelty can greatly improve your outreach efforts. Since newness is a pillar of newsworthiness, publishers are eager to get their hands on exclusive stories. This is why offering the media something never published before is essential for effective PR outreach.

As I mentioned previously, broad appeal on its own isn’t going to have a huge impact on campaign success. However, universal appeal still plays a role in getting a campaign in front of as many eyeballs as possible. Campaigns that appealed to a wide audience earned 38% more media pickups and 96% more social shares on average than campaigns created for a niche demographic.

Creating broadly appealing versus niche-focused content is a choice of fishing in a big pond or a little pond. You’ll have a larger volume of outreach targets and greater potential audience reach with a broadly appealing campaign. On the other hand, niche campaigns have limited reach because they’re much harder to get picked up by widely-read general news sites that want stories with mass appeal. Instead, you can only pitch the handful of publishers that cover the niche topic.

For this reason, we often create tangential content, or content about a popular topic related to a client’s vertical, for many of our clients whose goals include a high volume of links and media mentions. This being said, it’s possible to get a ton of media attention and engagement with niche-focused campaigns, which I explore later in this post.

When a combination of emotions, surprise, and broad appeal was present in a campaign, it supercharged the results.

So we know emotions and surprise work well on their own. However, when these factors were paired together with a broadly appealing topic, we saw even greater success. 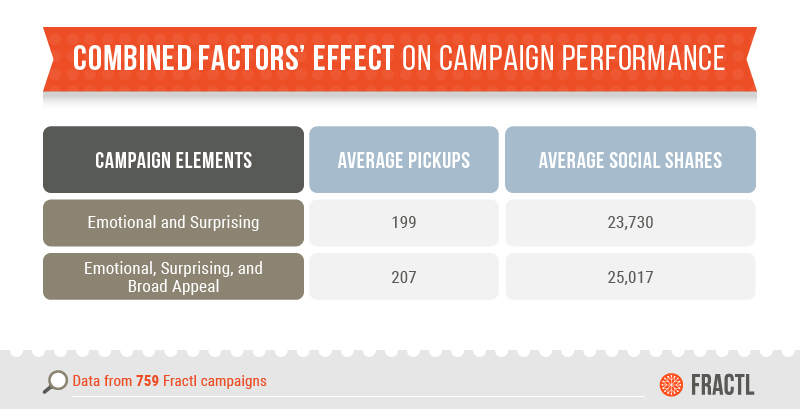 We know audiences are drawn to emotionally resonant, universally appealing, and surprising content, but these traits play a big role in campaign success before the public even sees the content – they’re crucial for getting your outreach pitch read and acted upon.

Content with these three traits has strong headline potential, which publishers immediately pick up on when they read a pitch. In other words, it’s going to be easy for publishers to write an irresistible headline if they publish your campaign. Without a great headline, it’s much harder to draw clicks and views to a story, which are required initial steps for getting others to link to and share the content.

Can’t picture how a single headline can be emotional, surprising, and have mass appeal? Here are examples of headlines from our campaigns that hit all of these factors:

If you were browsing your social feeds and came across any of those headlines, they’d be hard to resist clicking, right? Here’s a look at the campaign behind that last headline.

Campaign example: The surprising reason why most men cheat

We went straight to the source to conduct a survey of people who have cheated on a significant other. This was clearly an emotionally charged subject that would intrigue a large segment of the population. Furthermore, the campaign offered a fresh take on a topic commonly discussed to the point of oversaturation by big publishers that cover relationships. By coming at it from from the angle of “from the mouth of a cheater,” which isn’t often covered and definitely not in a data-centered way, the campaign had a strong surprise and novelty factor that went over well with both publishers and audiences.

The results? 175 placements, including features on Fox News, The New York Post, Cosmopolitan, and Men’s Health, and nearly 40,000 social shares.

Pro Tip: When you pitch an idea to a publisher, they picture potential headlines. It shouldn’t be overly complicated to communicate that your idea is emotional, surprising, and broadly appealing. Try the headline test: Consider how all three factors would fit into a headline by writing a few mock headlines that concisely capture the selling points of the campaign. Does it make for the perfect eye-catching headline?

How you can still score big without emotions and surprise

Of course, there are exceptions to the rules. Here’s how you can still earn a lot of media pickups and social shares with content that’s neither emotional nor surprising.

Successful niche campaigns were mostly educational and informative rather than purely entertaining, and many of these campaigns were data heavy. It’s no surprise that passionate niche groups are eager to learn more about the topics they care about.

Campaign example: The rise of the freelance worker

We analyzed 400,000 freelancer resumes to uncover new insights about the freelancing economy. While this topic isn’t universally appealing, it did have overlapping appeal within several niche audiences, such as HR and recruitment, freelance employees, and the general business community, which led to 269 placements including Forbes, Entrepreneur, and Fox News, plus more than 20,000 social shares.

Pro Tip: If your campaign topic appeals to several niche groups, you can increase your chances for media coverage on a variety of niche publishers, thus expanding your potential reach.

Based on our data, we found that campaigns that were absent of an emotional hook or element of surprise but did have a strong geographic angle still performed quite well.

Since our identities are closely tied to where we come from and where we live, campaigns based on geographical areas (countries, cities, states, regions) play into the audiences’ egos. In Fractl terms, we call this “geo-bait.”

Campaign example: Which states use the most solar power?

Using data from the US Department of Energy, we looked at which states were producing the most solar energy and installing the most solar panels. There wasn’t much surprising data here, as environmentally progressive states topped the rankings (hello, California), but incorporating fresh data and featuring a ranking of solar-friendly states helped this campaign earn more than 200 placements. In addition to the geo-bait angle, this topic had strong appeal to the environmental niche, which helped it get picked up by green publishers.

Adding three magical elements into your content won’t automatically lead to success. A handful of other variables can make or break your campaign, some of which will be out of your control. So which variables in your control can increase your chances for success?

Even the best content will fail to get any coverage if your outreach game is weak. This means absolutely no mass pitching your campaign to a long list of publishers. Not only do you need to choose the right targets for outreach (a.k.a. publishers that actually publish stories about your campaign topic), you need to choose the right person at that publication (a.k.a. the person who regularly writes about the topic). That way, you’re not alienating writers with irrelevant pitches. You also need to send compelling, personalized outreach pitches to each target (don’t worry, we have a checklist for that). By sending solid pitches, they’re more likely to open your emails in the future.

You’ll quickly lose trust with publishers (and audiences) if your campaign includes questionable data and inaccuracies. Make credibility a top priority for your work and you’ll have an easier time becoming a trustworthy content creator and maintaining your trustworthiness in the long term.

First, you need to only use authoritative sources and data in your campaign.

What’s not a good source?

Second, your campaign won’t be trusted if it’s riddled with errors. Our editorial team ensures campaigns don’t get released into the wild with glaring grammatical and factual mistakes. Include editorial guidelines and a quality assurance check within your production process to keep campaigns error-free.

One final word of advice: evaluate whether a campaign concept will be emotionally resonant, surprising, and broadly appealing before you move it into production. Our ideation guide sheds light on how we do this by scoring our ideas based on a 5-point grading rubric.

What trends have you noticed about your most successful content marketing campaigns? I’d love to hear how your observations confirm or differ from what I’ve shared.

Sign up for The Moz Top 10, a semimonthly mailer updating you on the top ten hottest pieces of SEO news, tips, and rad links uncovered by the Moz team. Think of it as your exclusive digest of stuff you don’t have time to hunt down but want to read!

The Potential Impact of Gen Z on SEO