What Do SEOs Do When Google Removes Organic Search Traffic? – Whiteboard Friday

We rely pretty heavily on Google, but some of their decisions of late have made doing SEO more difficult than it used to be. Which organic opportunities have been taken away, and what are some potential solutions? Rand covers a rather unsettling trend for SEO in this week’s Whiteboard Friday. 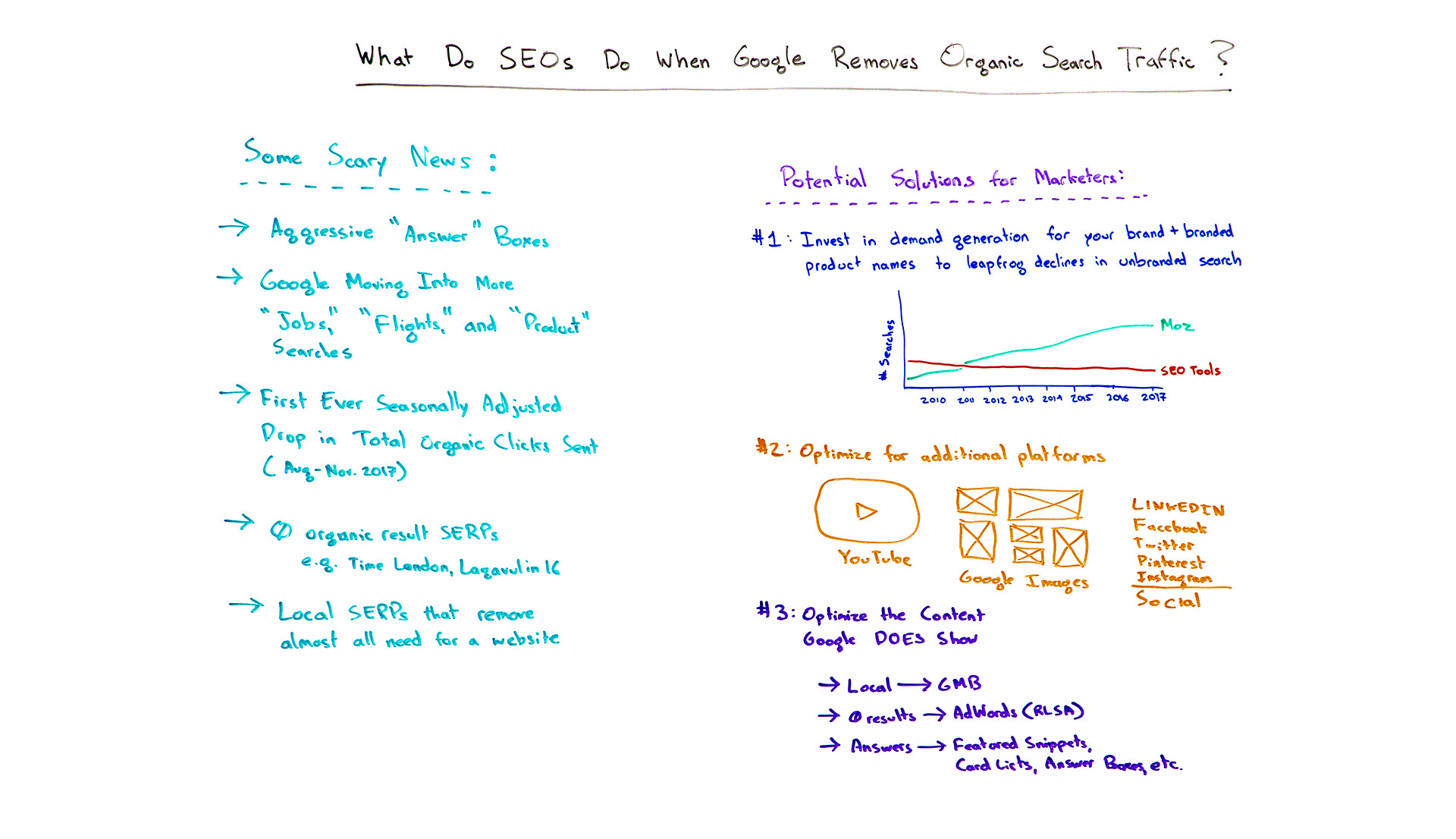 Click on the whiteboard image above to open a high-resolution version in a new tab!

Howdy, Moz fans, and welcome to another edition of Whiteboard Friday. This week we’re talking about something kind of unnerving. What do we, as SEOs, do as Google is removing organic search traffic?

So for the last 19 years or 20 years that Google has been around, every month Google has had, at least seasonally adjusted, not just more searches, but they’ve sent more organic traffic than they did that month last year. So this has been on a steady incline. There’s always been more opportunity in Google search until recently, and that is because of a bunch of moves, not that Google is losing market share, not that they’re receiving fewer searches, but that they are doing things that makes SEO a lot harder.

So, as a result, I think search marketers really need to start thinking about: What do we do as Google is taking away this opportunity? How can we continue to compete and provide value for our clients and our companies? I think there are three big sort of paths — I won’t get into the details of the paths — but three big paths that we can pursue.

1. Invest in demand generation for your brand + branded product names to leapfrog declines in unbranded search.

The first one is pretty powerful and pretty awesome, which is investing in demand generation, rather than just demand serving, but demand generation for brand and branded product names. Why does this work? Well, because let’s say, for example, I’m searching for SEO tools. What do I get? I get back a list of results from Google with a bunch of mostly articles saying these are the top SEO tools. In fact, Google has now made a little one box, card-style list result up at the top, the carousel that shows different brands of SEO tools. I don’t think Moz is actually listed in there because I think they’re pulling from the second or the third lists instead of the first one. Whatever the case, frustrating, hard to optimize for. Google could take away demand from it or click-through rate opportunity from it.

But if someone performs a search for Moz, well, guess what? I mean we can nail that sucker. We can definitely rank for that. Google is not going to take away our ability to rank for our own brand name. In fact, Google knows that, in the navigational search sense, they need to provide the website that the person is looking for front and center. So if we can create more demand for Moz than there is for SEO tools, which I think there’s something like 5 or 10 times more demand already for Moz than there is tools, according to Google Trends, that’s a great way to go. You can do the same thing through your content, through your social media, and through your email marketing. Even through search you can search and create demand for your brand rather than unbranded terms.

Second thing, optimizing across additional platforms. So we’ve looked and YouTube and Google Images account for about half of the overall volume that goes to Google web search. So between these two platforms, you’ve got a significant amount of additional traffic that you can optimize for. Images has actually gotten less aggressive. Right now they’ve taken away the “view image directly” link so that more people are visiting websites via Google Images. YouTube, obviously, this is a great place to build brand affinity, to build awareness, to create demand, this kind of demand generation to get your content in front of people. So these two are great platforms for that.

So if you’re in the local space and you’re saying, “Gosh, Google has really taken away the ability for my website to get the clicks that it used to get from Google local searches,” going into Google My Business and optimizing to provide information such that people who perform that query will be satisfied by Google’s result, yes, they won’t get to your website, but they will still come to your business, because you’ve optimized the content such that Google is showing, through Google My Business, such that those searchers want to engage with you. I think this sometimes gets lost in the SEO battle. We’re trying so hard to earn the click to our site that we’re forgetting that a lot of search experience ends right at the SERP itself, and we can optimize there too.

In the zero-results sets, Google was still willing to show AdWords, which means if we have customer targets, we can use remarketed lists for search advertising (RLSA), or we can run paid ads and still optimize for those. We could also try and claim some of the data that might show up in zero-result SERPs. We don’t yet know what that will be after Google rolls it back out, but we’ll find out in the future.

For answers, the answers that Google is giving, whether that’s through voice or visually, those can be curated and crafted through featured snippets, through the card lists, and through the answer boxes. We have the opportunity again to influence, if not control, what Google is showing in those places, even when the search ends at the SERP.

All right, everyone, thanks for watching for this edition of Whiteboard Friday. We’ll see you again next week. Take care.

Sign up for The Moz Top 10, a semimonthly mailer updating you on the top ten hottest pieces of SEO news, tips, and rad links uncovered by the Moz team. Think of it as your exclusive digest of stuff you don’t have time to hunt down but want to read!

The Potential Impact of Gen Z on SEO